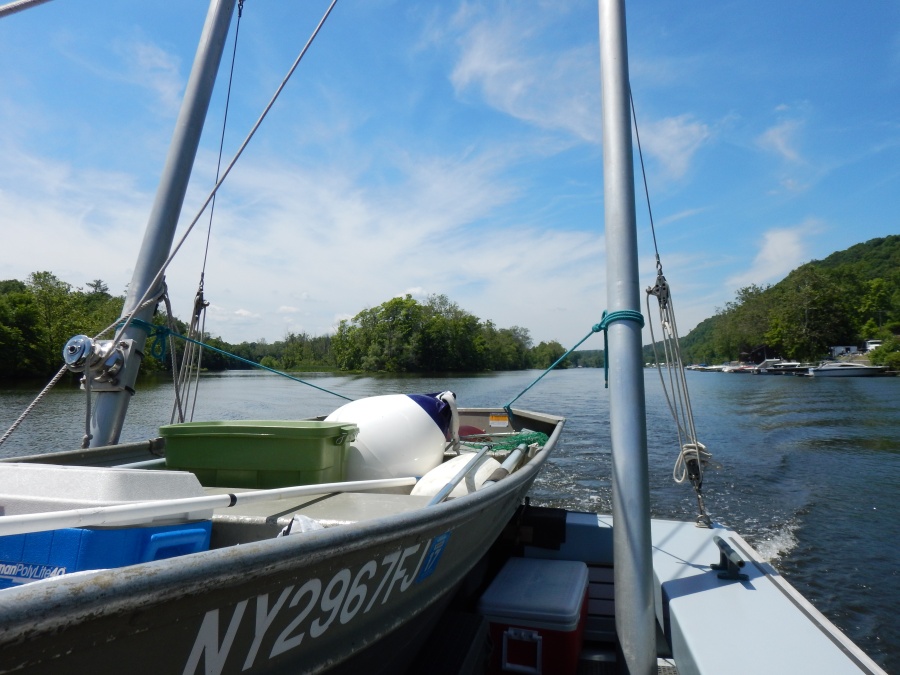 I arrived at Norrie Point Marina at 0700 to meet the Riverkeeper boat and cast off for Catskill. We passed the DEC sturgeon tagging team and waited to see what they would reel in. We drifted alongside for a little over an hour, watching them cast and reel in four times with no luck before we started to head north.

I’ve only seen dead sturgeon on the Hudson, floating like an oil slick, a reminder of the work we have ahead of us. The tagging team caught forty-two sturgeon the day before, but the male to female ratio was 42:2, which is not very helpful for an endangered population. Hopefully I see a sturgeon in my time on the Hudson; a live one, not one suspended on the surface or a graphic sturgeon on the roadside estuary signs.

The Hudson changes as you move upriver. The waterway narrows and the mountains shrink to wetlands, depths begin to vary over shoals and into manmade channels. The Catskills emerge, blue and hazy in the background, reminding me what lies beyond the river. Down on Haverstraw Bay and up past Storm King, its easy to forget that there’s anything beyond the hills that flank the Hudson. The scenery flattened as we headed due north and the world felt bigger. The river was wide again at points past Catskill, but it was nothing like the river I see out my cabin window in Croton-on-Hudson. Shallows popped up on the chart in seemingly random places and the channel jumped from east to west to center. Up there, boaters can’t tear across the bay without more than a glance at a chart; at the helm, my eyes danced between depth sounder, GPS, and water, as I carefully rode the edge of the channel and waved at the people we passed.

We started out at 0600 on Saturday morning, leaving our slip quickly and sampling as we travelled north to Waterford. I was at the helm for much of the trip as Carol sampled and John wrote emails, made calls, and told me Riverkeeper tales. I saw more bald eagles in that nine hour day on the water than I’ve seen in the nineteen years of my life. John inspired me with stories of saved tributaries and community members dedicated to helping our river. He noted, proudly, that a kayaker came up to him recently and asked, “How are we doing?”. Not, “How’s the river?” but “How are we?”. The river is so much a part of the communities that surround and are enveloped by it, so of course its well being is our well being. This kayaker’s clear sense of kinship with the river and with the people who care for it is inspiring, and I’d like to see it more often.

As we entered Port Albany, I saw another river. We navigated the lone channel easily; the river here was carved out for asphalt carrying barges and we saw train cars full of crude oil on the banks. Although this river is industrailized, kids were still tubing, kayaking, and swimming on the outskirts of the channel.

After industrial Albany, we found ourselves back in the wild Hudson. Occasionally I’d spot a motorboat anchored off a beach, or a lone fisherman in a rowboat, but we mostly had the river to ourselves. It was a peaceful Hudson that I hadn’t met yet, and I was struck by the pristine natural state it appeared to be in. John then pointed my attention to the islands we had been passing since Athens. The tops of wood posts, each only a few inches apart, peeked over the waterline and ran the perimeter of almost every island we passed. They formed dikes, which were used to contain piles of sediment that were dredged up in channel construction. So the most natural-looking part of the Hudson is scattered with “fake islands”. Ironic?

As day two came to an end and we passed Troy,  I saw the beautiful Wynants Kill through an opening where a barrier had recently been removed. In the distant past, the stream was abundant with wildlife, and herring would migrate in to spawn. Eighty-five years ago, the barrier was installed and that migration ended. Following the removal of the barrier, hundreds of herring were documented migrating back into Wynants Kill. This historic moment will hopefully be a catalyst for future barrier removals that will help revive and restore the Hudson’s fish population. That would make the founding Riverkeeper fishermen proud.

As the Troy lock opened and we went to collect the last three samples before docking in Waterford, John informed me that I was now entering the Hudson River for the first time. “You’ve only ever been in the Hudson River estuary, now you’re in the Hudson River“. As I left the brackish water south of me, I saw another new Hudson, one of freshwater and locks and tributaries like the Mohawk, whose lock loomed ahead. We docked in Waterford, Carol and I loaded up water sampling equipment, and we all headed back south.