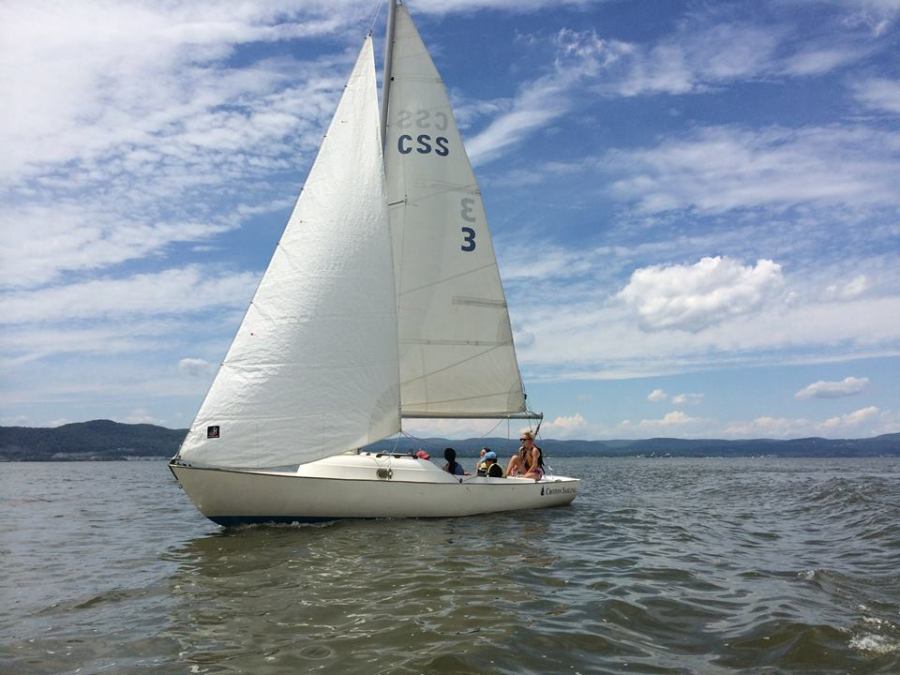 From tacking around to pick up floating remains of potato chip bags and mylar balloons to explaining why the river water is dirtier after it rains, I have learned a lot about explaining water quality to kids through teaching at EAST Sailing. Ages 8 to 15, they all understand a lot more than you’d think about the complications of the environmental issues that face our generation.

There’s a wide pipe next to camp that fills and empties with the flood and ebb tides, pulling street runoff into the Hudson. Most days, the water that comes out of the outfall looks the same as when it went in; some days its dauntingly murky and gives off various nauseating odors. As the kids get on the dock and notice the reeking water pouring from the pipe, they get concerned.

“Should we be swimming in this?”

“Does the town know this is happening?”

“What can we do about that gross water?”

I tell them about Riverkeeper, the organization I’m interning for on my afternoons and weekends off. When we’re sitting on land, I pull up Riverkeeper’s interactive Hudson River Data map and show them where the river is safe for swimming.

They’re curious about the specifics of the water testing procedures and equipment; so I tell them about enterococcus, which is an indicator for fecal contamination. Riverkeeper uses IDEXX’s Enteroalert to assess the safety of the Hudson’s waters for recreational use.

We also talk about other water quality issues, like the water crisis in Flint, Michigan that happened this past year. The younger kids are perplexed and upset that the officials in the city allowed the drinking water to be polluted; the older kids ask questions about marginalized communities and we get into conversations about new theories on environmental racism. I tell them about a benefit concert that my environmental club hosted at school this year, and one kid on my boat wonders if his boy scout troop could do something similar.

They all seem to feel a connection to the river, whether they grew up on its banks or not. One camper spun her boat around in the middle of a race yesterday to pick up a floating soda bottle. While I know she’s not a huge fan of racing, I was still pretty surprised that she ditched the competition to pick up trash out of the river. When I asked her about it she replied, “I just hate seeing garbage out here. You know, its so pretty here and I’d rather clean it up than win a dumb race”.

While she might not be set up to be on the next America’s Cup team, she’s definitely found a love for this bay through her time at sailing camp. She also stopped her boat the other day to investigate a dead catfish (that I just barely stopped her from picking up out of the water with her bare hands) and she had so many questions about what it died from and if that had anything to do with pollution.

Kids get it. They know that the issues of clean water (and a clean planet) are much bigger than them, but their eyes and arms are wide open; they’re ready to learn and to clean this mess up.

4 thoughts on “Clean Water for Kids”